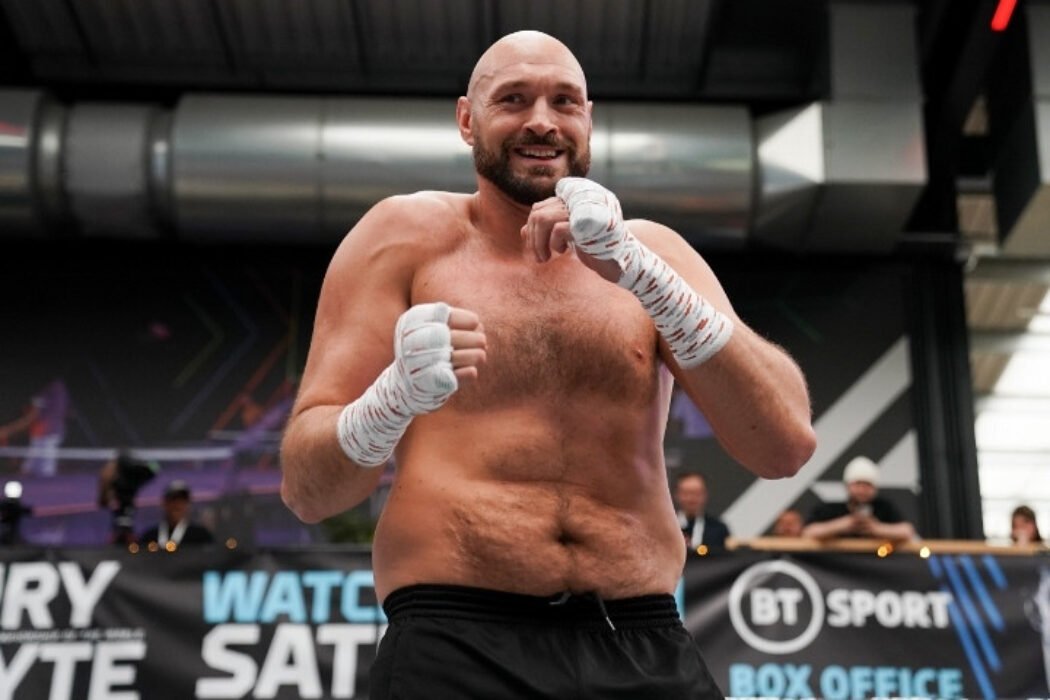 Boxing heavyweight champion of the world, Tyson Fury has been banned from visiting the United States, his brother Tommy has confirmed.

The report was first made back in June that Tyson, 34, was denied entry to the US over his alleged links to crime boss Daniel Kinahan but he did not respond to calls for comment.

Now former Love Island star Tommy has finally confirmed both he and his brother are still being refused entry to the US.

Speaking on an MMA podcast today, Tommy said: ‘Me and Tyson just can’t get into America at the minute and that’s the way it is.’

The ban is understood to centre around the Fury family’s links to Irish boxing promoter Kinahan, who has been sanctioned by the US.

The US Treasury have imposed sanctions on Kinahan and the US Department of State have also announced the offering of rewards of up to $5million for information leading to the arrest and/or conviction of three members of the Kinahan family.

The ban means WBC champion Tyson, who last fought in the States in October 2021 for his trilogy meeting with Deontay Wilder, is having to restrict his fights to being held in the UK or the Middle East.

Directly asked about ‘the Kinahan situation’ on the MMA Fighting on SBN podcast, Tommy said: ‘I don’t know (what’s happening), that’s what I pay my lawyers for and my legal team every day, they’re sorting it and I said please get this resolved as soon as possible and that’s where I’ve left it at the moment.

‘I’m hoping it gets resolved asap because I want to come to America not just for boxing and of course for the big one to get this fight over the line but if it doesn’t get resolved for a long time I can’t speak on that on how long this is going to take… But let’s say it’s a long time, let’s get it on over here. I’ll fight that man wherever, I’m not bothered. I am ready to go.’

Addressing claims that Irish boxing promoter Kinahan runs a global organised crime group, Tyson previously said: ‘That’s none of my business and I don’t interfere with anybody else’s business.’

Tyson, who was photographed in Dubai in February this year with the US sanctioned Kinahan, said: ‘Because I had my picture taken with a man it doesn’t make me a criminal.

‘I’m just a boxer. There could be a criminal in this building.’

Kinahan has been named as a senior figure in organised crime in Dublin’s High Court, and in April this year, the US Treasury imposed sanctions on him, his father Christy Kinahan and brother Christy Kinahan Jr as well as several associates of the Kinahan family.

Kinahan has advised Tyson Fury in the past, but Fury has not been accused of criminal activity. Tommy says his own ‘name has been caught up in a mess’.

‘I cannot get into America, even right now, I cannot go to America,’ he added.

‘Forget the boxing talk, America’s my favorite place to go: the food, the weather, everything, the people, I love America. I love everything to do with America and it’s stopped me from going there. In my personal life, me and the missus (girlfriend Molly Mae Hague) love going to New York around Christmas – can’t do that.

‘We can’t do a number of things now. So boxing’s not all that’s affected. But that’s the same right now, I cannot enter America and that’s why the fight didn’t happen.

‘I don’t believe there’s anyone in this country that wouldn’t come to that fight. I believe it would break all records. Definitely we could draw 70,000.’