Stallone, who wrote Rocky and starred as the boxer, has been fighting for his rights to the character and previously said he has ‘zero ownership’ of it. Winkler produced the film, and Lundgren starred in Rocky IV as imposing boxer Ivan Drago.

With the teasing of spin-off film Drago, based on Lundgren’s character, Stallone has claimed that the characters are being ‘exploited’.

In the caption, he slammed Irwin Wrinkler by referring to him as the most hated, untalented, decrepit producer in Hollywood.

Sharing a screenshot of a story on the spin-off, Stallone wrote on Instagram:

‘Another Heartbreaker… Just found this out…ONCE AGAIN , IRWIN WINKLER , this PATHETIC 94 year old PRODUCER and HIS MORONIC VULTURE CHILDREN, Charles And David , are once again picking clean THE BONES of another wonderful character I created without even telling me.

‘I APOLOGIZE to the FANS , I never wanted ROCKY characters to be exploited by these parasites… By the way, I once had nothing but respect for Dolph but he NEVER told me about what was going on behind my back with the character I created for him !!! REAL FRIENDS Are more precious than gold.’

‘After IRWIN WINKLER And FAMILY SUCK ROCKY DRY ! Presumed to be the most hated , untalented , decrepited , Producer in Hollywood and his cowardly children have found their next meal… Drago ?

‘Throughout history so many artists in every industry ,recording , painting writing , you name it have been destroyed by these blood suckers Who have destroyed so many families , lining their pockets with other people work.. #parasite producers #exploited artists victims [sic].’ 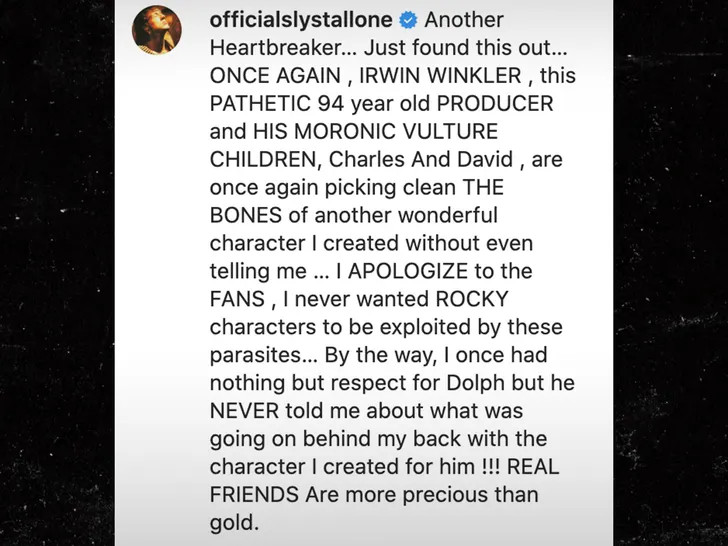 Reacting to this, Lundgren took to Instagram to share photos of himself and Stallone playfully throwing punches.

‘Just to set the record straight regarding a possible Drago spinoff.

‘There’s no approved script, no deals in place, no director and I was personally under the impression that my friend Sly Stallone was involved as a producer or even as an actor. There was a press leak last week which was unfortunate. In touch with Mr Balboa – just so all the fans can relax…There ya go..’ 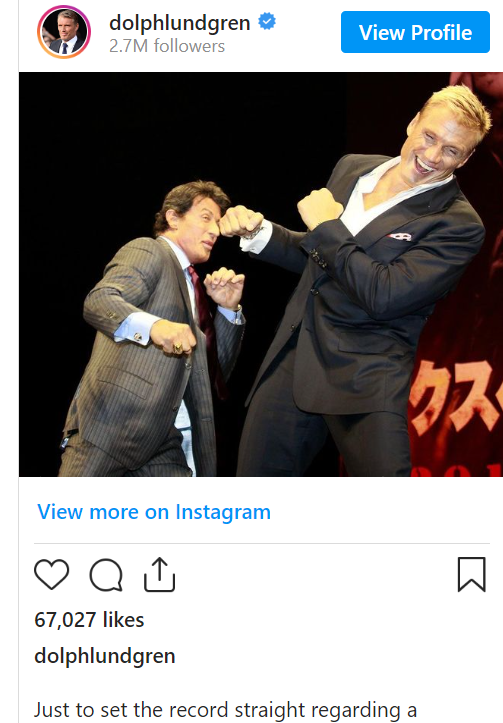 Winkler is yet to respond.