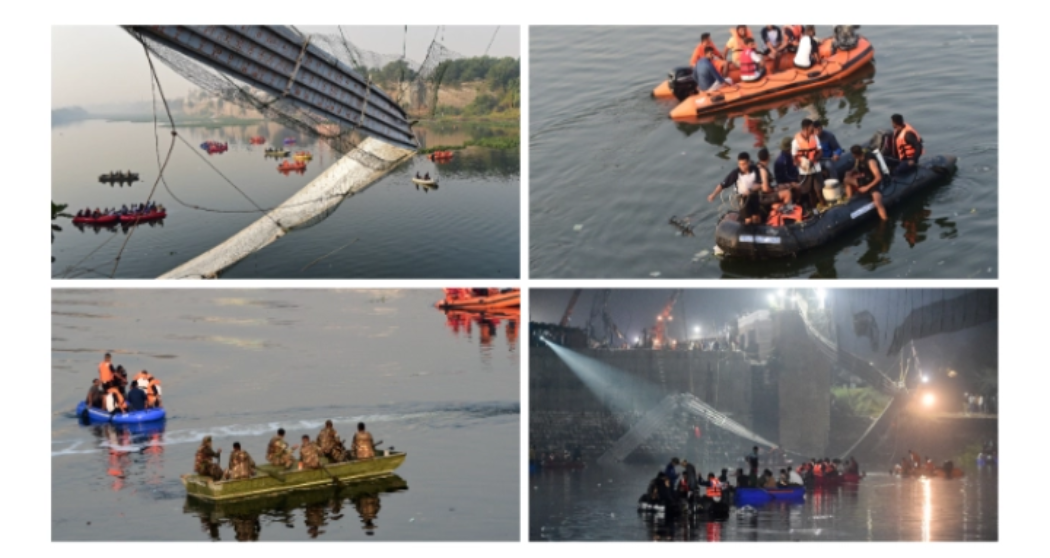 About 132 people have died after a century-old cable suspension bridge collapsed into a river Sunday evening, October 30, in the western Indian state of Gujarat, submerging hundreds in one of the worst accidents in the country over the last decade.

Videos shared on social media showed people holding tight onto the metal cables of the partly collapsed bridge in distress as emergency teams and rescuers used boats and inflatable tires to reach them. Some people were seen swimming ashore to safety. Others, who were fished from the waters, were carried away and transported to hospitals in private vehicles and ambulances.

Authorities on Monday morning, October 31, said the 19th-century, colonial-era pedestrian bridge over the Machchu river in the area, collapsed because it could not handle the weight of the large crowd, as the Hindu festival season drew hundreds of people to the recently opened tourist attraction.

Before the collapse, the 761-foot-long bridge had been closed for renovation for almost six months and was reopened just four days ago.

Indian government officials fear the death toll could rise. State minister Harsh Sanghvi told reporters that 132 people had died so far and many were admitted to hospitals in critical condition.

Sanghvi said emergency responders and rescuers worked overnight to search for the survivors and that those killed and injured were mostly teenagers, women and older people. Teams from the Indian Army, Navy and Air Force were also dispatched to help with the rescue.

Prime Minister Narendra Modi, who is in his home state of Gujarat on a three-day visit, said he was “deeply saddened by the tragedy.” His office announced compensation to the families of the dead and urged speedy rescue efforts.

On Saturday, a Halloween crowd surge killed more than 150 mostly young people who attended festivities in Itaewon, a neighborhood in Seoul, South Korea. On Oct. 1, police in Indonesia fired tear gas at a soccer match, causing a crush that killed 132 people as spectators attempted to flee.