Not fewer than fourteen people were shot during a drive-by shooting on Halloween night, Monday night, October 31, in East Garfield Park on the West Side of Chicago including three underage aged 3, 11, and 13.

Police says the shooting happened in the 2700 block of West Flournoy Avenue Chicago.

A group of people were gathered near the intersection of California and Polk at approximately 9.30pm when at least two people in a passing vehicle fired indiscriminately into the crowd, Chicago Police Superintendent David Brown explained.

Brown said the group had been standing near the intersection, possibly for a balloon release, when a vehicle drove up and opened fire.

Surveillance video captured the entire shooting, which was over in seconds.

A spokesperson said up to 14 people may have been shot in the incident with some suffering life-threatening injuries, including children who had been out trick or treating. 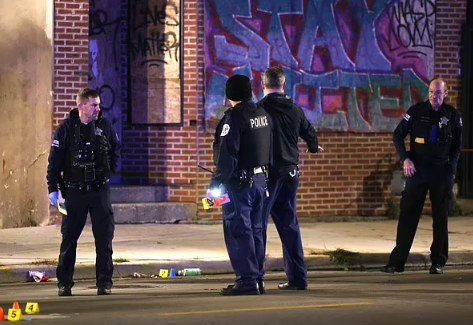 The victims range in age from 3 years old to adults in their 30s, 40s, and 50s. One person is also believed to have been struck by a car.

The circumstances of the shooting are still being investigated but it’s believed a vigil was taking place at the intersection at the time the firing began.

Brown said preliminary information indicated there were at least two shooters seen on the video, although that number could change. The shooters appeared to fire indiscriminately into the crowd.