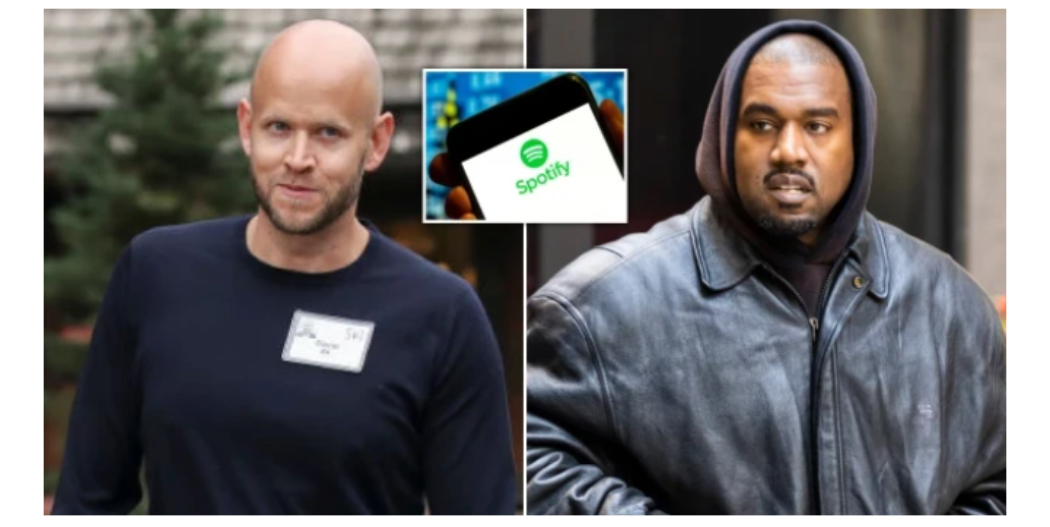 Undefire rapper, Kanye West’s music won’t be taken down from streaming giant, Spotify unless his record label requests it, the streamer’s CEO has confirmed.

Since making remarks regarded as anti-semitic on a recent podcast, West has seen a series of companies sever ties with him, including his touring talent agency CAA , fashion house Balenciaga, as well as clothing company Gap.

Daniel Ek, Spotify’s CEO, condemned the rapper’s recent alleged anti-Semitic remarks as ‘awful’ but revealed his music would still remain on the platform.

He said the comments made by West were ‘just awful’ but his music itself doesn’t violate their policies.

Ek told Reuters: ‘It’s really just his music, and his music doesn’t violate our policy. It’s up to his label, if they want to take action or not.’

Had the rapper’s comments been made in a recording, it would have then violated the platform’s hate speech policy and would be removed.

Adidas also ended their 10-year partnership with the Yeezy founder after facing mounting calls from fans to drop the rapper.

It said in a statement: ‘Adidas does not tolerate anti-Semitism and any other sort of hate speech.

‘Ye’s recent comments and actions have been unacceptable, hateful and dangerous, and they violate the company’s values of diversity and inclusion, mutual respect and fairness.

‘After a thorough review, the company has taken the decision to terminate the partnership with Ye immediately, end production of Yeezy branded products and stop all payments to Ye and his companies. Adidas will stop the Adidas Yeezy business with immediate effect.’

The end of their partnership came after a petition calling for company to part ways with West reached more than 160,000 signatures.